It’s no secret I’m a big fan of cupcakes, anyone who follows me on Twitter will probably see I tweet an awful lot about cakes. Although I probably enjoy the baking and decorating more than the actual eating – eating is good (obviously!) but I love how you can be so creative with cupcakes and that anything goes basically!

I’ve had a few special occasions in the past month which has allowed me to make some lovely cupcakes. I just can’t turn up at a friend’s house for a Birthday celebration without a polka dot cake tin brimming with treats, any more than I would go and buy a Birthday card from a shop – it’s just what I do. So here are a few photos of my recent bakes. I’m by no means a professional baker and I’ve barely even tried modelling with sugarcraft before but I do believe you don’t have to be an expert at anything to make cupcakes that will bring a smile to people’s faces. 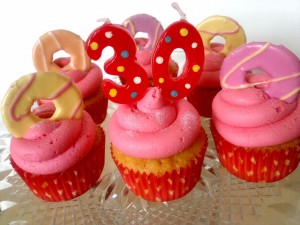 These were made for my beautiful friend and bride-to-be (as mentioned in my previous post) who celebrated her 30th Birthday last week. I knew I wanted to make something a bit silly and a bit funky so why not pipe super, bright pink icing on a cupcake and stick a ‘party ring’ biscuit in it?! And the big ‘30’ candles were a special touch. 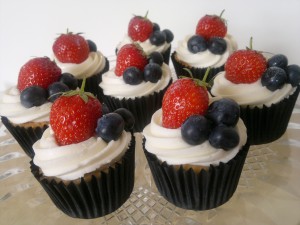 The Queen’s Diamond Jubilee was another excuse to bake, I baked for Wills & Kate’s wedding last year – not actually ‘for’ their wedding (although I’m sure they would have loved my cupcakes) but you know what I mean! So using my favourite summer fruits and a delicious cream cheese frosting, I created these patriotic red, blue and white cupcakes. 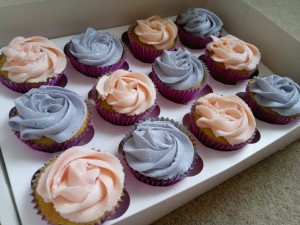 One of my lovely friends, Janey, got married in Italy a couple of weeks ago, which was a very small, intimate affair with close friends and family. So when Jane and a her new hubby Andrew got back to (a very rainy) Manchester they had another celebration with everyone. Jane asked me and Kara (another keen baker) if we could make a few cupcakes for the guests and of course we obliged! So I made these pretty pastel coloured cupcakes using a new rose effect nozzle and Kara baked two batches of extremely chocolately, chocolate cupcakes. I don’t think there were any left by the end of the night! 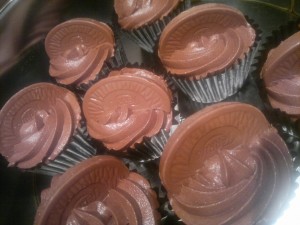 And finally, I made these chocolate orange cupcakes when visiting my lovely friends, Nichola and Jay, in Doncaster last month. These happen to be personal favourites of Mr Thomas and as I happened to still have a Terry’s Chocolate Orange left over from Christmas I thought it would be rude not to make them and I think they were greatly received. The gorgeous sponge includes orange juice, orange zest and orange extract which makes a very orangey cake!

The reaction to your fabulous design on our invite has been unreal. Everyone has been hugely…

Hi Suzy, I’ve just got home to the most delightful package of truly beautiful invitations! We…

Just came home to the save the date cards! We absolutely love them thank you sooooooo…

Hi Suzy, The invites have arrived at my parent’s, they love them and couldn’t believe how ‘Emily’…